Sen. Cthulhu was  at Miskatonic University in Arkham on Thursday at the Elder Party Convention and announced his acceptance to run in the 2012 U.S. Presidential Race. Sen. Cthulhu has been at the forefront of today”s issues and is considered the leader of the current Elder Party. Throughout the summer, Sen. Cthulhu has been touring the country in support for his C.T.H.U.L.H.U. political action committee. 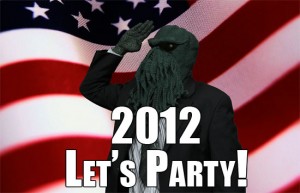 “Ia! Ia! Cthulhu Fhtagn!” he said into the microphone as the crowd again cheered and chanted along with him in unison. Sen. Cthulhu went on to speak on legislation he has been working on throughout the summer specifically with those associated with his super-pac C.T.H.U.L.H.U. He took on the environment, education and the future of mankind. “Miskatonic leads the world,” said Cthulhu about education, “in ancient esoteric wisdom – the lessons from the stars. This is something America needs now rather than fill their minds with the mindless media.” He continued by outlining his reform on American education to ensure that truly is no one left behind. “No one,” he repeated with his finger pointed at the crowd followed by seconds of silence.

Sen. Cthulhu has been pushing his super-pac, the Consensus Toward Honest Understandable Legislation Heralding Unity, aka C.T.H.U.L.H.U., on a tour from Los Angeles to Dunwich. “C.T.H.U.L.H.U. is committed to having Americans truly understand the horrors that go into their legislation. Gone will be the days where we will not truly know what goes in a bill. Our goal is to have every backroom handshake deal that is hidden within the legislation will be quite visible. We”ll make it scream.”

In a matter of one hour, Sen. Cthulhu entered into his acceptance of the the Elder’s nomination for President of the United States. “Today, my friends, today is the day that we will awake from our slumber. We will shake the pillars of the nation and rise from our current state of affairs and we will truly make the change of a new aeon. Today is our day.” The crowd loosing control erupted in a unified voice chanting,”Ia! Ia! Cthulhu Fhtagn!”
Sen. Cthulhu and his entourage were escorted throughout the campus by local authorities. “Cthulhu”s safety is of utter importance to the security of our world,” said his Staff Security Chief Inspector Legrasse. Sen. Cthulhu then visited the Special Collections in the Orne Library to view texts that are exclusive to only top researchers at Miskatonic.