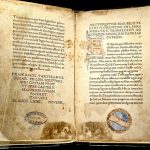 Only available in Latin and from the 2nd century by Marsilio Ficino, 1471 CE. A foundation for many of the magical grimoires of the middle ages and renaissance. It is presented as dialogues in which master, Hermes Trismegistus ("thrice-greatest Hermes"), enlightens a disciple. This is the foundation of Hermeticism discussing the divine, the cosmos, mind, and nature. Some touch upon alchemy, astrology, and related concepts. Parts of the Hermetica appeared in the 2nd-century Gnostic library found in Nag Hammadi.

Seeing within myself an immaterial vision that came from the mercy of God, I went out of myself into an immortal body, and now I am not what I was before. I have been born in mind!

Chancellor Smith, founder of Miskatonic-University.org, has been a long time fan of H.P. Lovecraft’s writings. Player of all things Call of Cthulhu™ and various other role-playing games and historian of Occult Studies. In addition to his work here, he is also a composer of dark ambient and founder of the SaberCraft saber choreography notation system.

Not available in the Bookstore yet.