The New America from Nando Costa on Vimeo.

We’re proud to announce that Miskatonic University is a sponsor for the The New America – a short film. We first learned about the project through Kickstarter and joined along with a number of people on this clever project developed and produced by Nando Costa. The video is produced from wooden carved film stills. Each $50 donation ensured that 1 frame of the film would be designed and developed. This is the promo video where the Mr. Costa describes the work and the process of making this film.

The running time for The New America reached 2:37 seconds with over $30,000 donations. The film depicts a compilation of visions of a possible world filled with esoteric symbols to excite lovers of conspiracy theories and their foundation in the United States. The theme of a “Central Plot” of world domination is present throughout the piece. 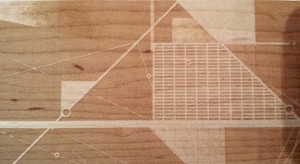 Kickstarters who joined in the project and donated at least $50 recieved a random frame from the film. If you did not get a chance to join early on – there are still some frames left which you could purchase here: etsy.com/listing/166690806/randomly-selected-one-of-a-kind-laser

Miskatonic University sponsored the film because of it’s conspiratorial world domination theme. As the Lovecraft Mythos inspired ideas such as the Illumanti game along with literary fictitious groups like The Cult of Starry Wisdom, the world of Lovecraft fiction heavily delves into conspiracies and secrets.

“The abstract storyline showcased in this piece is a concoction of a variety of ideas and can perhaps be described as a union between concepts and experiments born during the Situationist movement and real life events experienced during the last few years in American society. Particularly the duality between the economic downturn and the shift in values and beliefs of many citizens.”
– Nando Costa, The New America

Bottom Line: Take 3 minutes out of your day to see a film using a medium like we’ve never seen – The New America.

Miskatonic University is a proud sponsor of a number of projects including the Miskatonic School For Girls, Nando Costa’s The New America and Ravelry designer Nancy Nutt. Each year we sponsor several ideas related to Lovecraft fiction and its themes. As a community partner we support others in their ideas and initiatives to spread the influence of the works of H.P. Lovecraft.