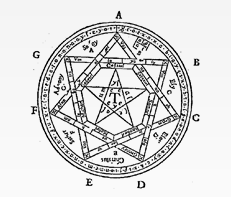 Occult in History as it pertains to religion and science, and the modern practical application of some rudimentary occult practices of magic. This course is offered to further the knowledge of magic; metaphysical and paranormal activities. The study of some magical organizations such as hermetic orders, Wiccan covens or circles, esoteric societies, arcane colleges, and other groups which may utilize different terminology.

Occult as it pertains to religions: An interpretation of occultism its concepts as found in the belief structures of religions such as Gnosticism, Hermeticism, Wicca, Satanism, Thelema, Judaism, Kabbalah, Christianity, Hindu, and Neo-paganism. Elder God Mysticism & Pythagorian Studies, ”Knowledge meant only for certain people” or ”knowledge that must be kept hidden.”

A small fee for materials will be required for the practical applications portion of this course.

This course was developed by Dr. Matthew Green, Professor of Occult Studies